– We have fused the Green Fluorescent Protein (GFP) to the cell-penetrating peptide Cupid to create Cupid-GFP.

– Crucially, when solubilised in water or media, Cupid-GFP is non-fluorescent. Cupid-GFP is only fluorescent when folded correctly, and this only happens within live cells, offering a key advantage over other CPP-GFP constructs.

– When added to a culture of mouse cardiomyocytes we observe a time-dependent increase in characteristic GFP fluorescence within the living cells monitored using confocal fluorescent microscopy.

– The GFP fluorescence is diffusely distributed throughout the interior of the living cells, reaching saturation in 60 minutes.

– The data show the Cupid-GFP peptide penetrates into living cells where it folds correctly into its fluorescent form. 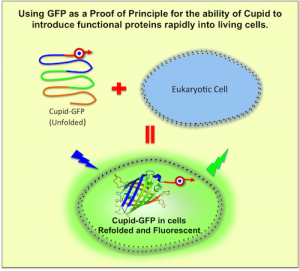 We have taken the GFP protein and attached the cell-penetrating peptide sequence ‘Cupid’ to it (Fig 1A).

After purification this Cupid-GFP protein is >90% pure and migrates as a single band on SDS-PAGE with a molecular weight of 32.3kD (Fig 1B).

When solubilised (in media or water) Cupid-GFP protein has no intrinsic fluorescence at the excitation peak of 495 nm, which indicates it is in a “disordered” state (Fig 2, and Time Course data). 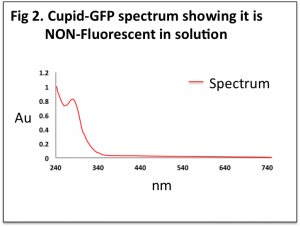 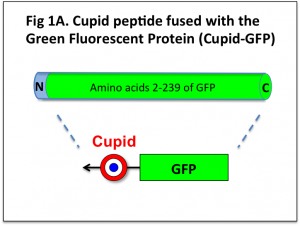 The Cupid-GFP peptide was dissolved in media at a final concentration of 5 μM and added to confluent mouse cardiomyocytes and the cells were observed under a Confocal Fluorescent Microscope in real time. Upon addition of Cupid-GFP, cellular fluorescence increases with time (Fig 3). Selecting a confocal plane through these cells showed that as fluorescence increased with time, it was evenly spread through the cells in the section (Fig 5). 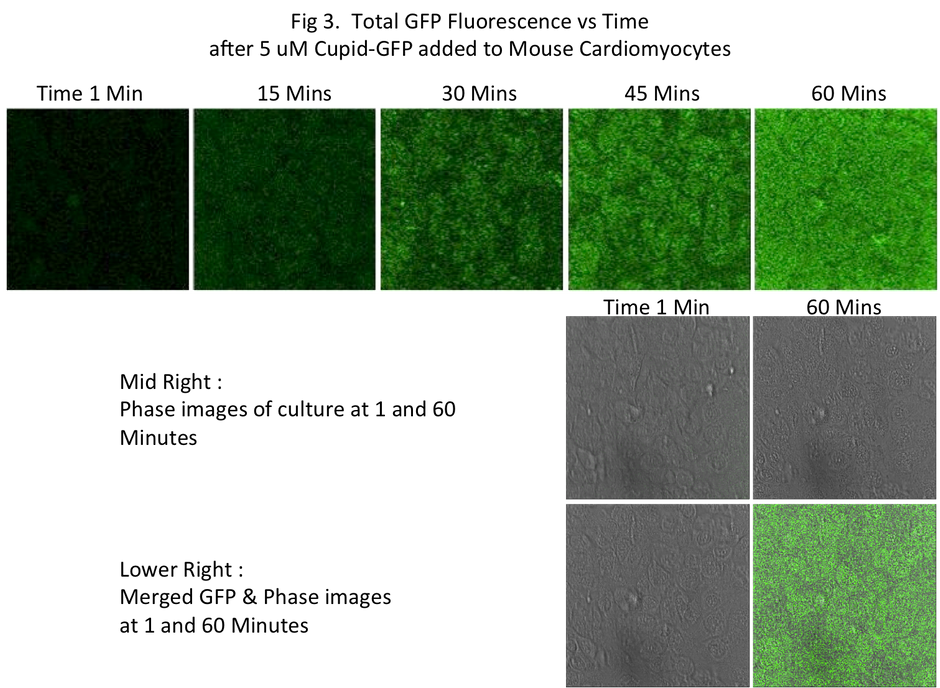 This increase in fluorescence plateaus at around 1 hour (Fig 4), and remained approximately 4 fold greater than background levels (comparing raw data from the Green channel light).

Within each cell the green fluorescence was observed to be diffused throughout the interior (Fig 5) without apparent localization to or within any observable structure. 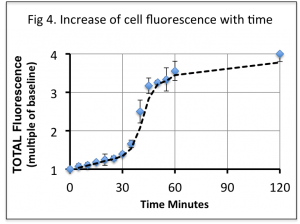 Several previous studies have taken a variety of Cell Penetrating Peptides (CPPs) fused to GFP and asked the question of whether GFP can be taken into cells and if so, examined the manner of cell entry (Refs 1-12).

In previous confocal microscopy studies using GFP linked to other CPPs, such as VP22, TAT or Polyarginine / Polylysine, researchers have discovered CPPs first adhered to the cell plasma membrane before being enveloped into small vesicles and endocytosed (Ref 8-10). Clearly, whilst these Type 1 CPPs do enter living cells, they and their cargo mostly remain locked into such vesicles, raising questions about the effectiveness of cargo delivery to the wider interior of the cell.

A study with GFP, not linked to any CPP but modified to contain a cationic “patch”, concluded cellular uptake is dependent on cell-surface glycosaminoglycans, similar to that observed with cationic CPP peptides such as Polyarginine (Ref 11). Another confocal based microscopy study using fluorescein-labled TAT found it did not enter canine kidney cells with intact plasma membranes but accumulated at their basal side (Ref 12).

These reports prompted us to use live cell imaging and confocal instrumentation to study the Cupid-GFP peptide effect on live mammalian cells, both to ensure no fixation artifacts (Ref 8) and to monitor GFP localization throughout the cells under study. Uniquely amongst such studies, our Cupid-GFP is not fluorescent at the start of the experiment and remained non-fluorescent if cells were absent. This meant that the cells did not require any washing before imaging and could be monitored continuously over time.

We find that when Cupid-GFP is added to the media of mouse cardiomyocytes (final concentration of 5 μM) it causes these cells to rapidly exhibit GFP fluorescence. The increase is initially slow until 30 minutes when the fluorescence increases rapidly to 45 minutes, thereafter slowing in rate to reach a plateau after 60 minutes. This pattern might reflect the refolding kinetics as internalized Cupid-GFP acquires a fluorescent state through the action of the cellular protein folding machinery in the cytosol.

From the earliest time points which fluorescence could be seen, and at all successive time points, fluorescence appeared to be spread diffusely throughout the cells. Using the ability of the confocal microscope to look through cell sections, we did not observe fluorescence restricted at any time within cell structures. This is in marked contrast to confocal studies with other fluorescent-linked cell permeable peptides previously mentioned (Ref 8-10), in which fluorescence was observed within vesicles associated with the endosome pathway.

It has been estimated that 1 μM well-folded wild-type GFP molecules are required to equal the endogenous autofluorescence of a typical mammalian cell, that is, to double the fluorescence over background (Ref 13). Our data indicate that in cells treated with 5 μM Cupid-GFP, the green fluorescence increased to 4 times the base fluorescence suggesting the correctly folded fluorescent GFP reached a concentration within the cells of 3 μM.

We have manufactured Cupid-GFP, a 33 kD protein that is not fluorescent when dissolved in media. When added to the media of cultured cells Cupid-GFP rapidly enters these cells where the GFP cargo folds into its functional (fluorescent) conformation, mediated by the cells themselves. Confocal sections through living cells suggest Cupid-GFP penetrates directly through the membranes since no fluorescence was observed in endocytotic vesicles, typically seen with other CPPs which engage endocytosis to enter cells (such as TAT and polyarginine). Unlike studies with these other classes of CPP, emerging Cupid-GFP fluorescence was observed distributed throughout the entire cell interior.

The Cupid cell permeable peptide is therefore the vehicle of choice for rapidly introducing bioactive peptides and proteins throughout living cells.