Protein kinase inhibitor (PKI) is an endogenous thermostable protein that inhibits PKA (cAMP-dependent protein kinase) activity and plays an important physiological role in regulating PKA function. PKA plays a critical role in numerous cellular processes. This is particularly evident in the nervous system where PKA is involved in neurotransmitter release, gene transcription, and synaptic plasticity. Through its interaction on PKA, PKI modulates neuronal synaptic activity, is involved in morphogenesis and symmetrical left-right axis formation and also plays a role in regulating gene expression induced by PKA. (1, 2)

The PKI protein binds directly to the catalytic subunit of PKA acting as a pseudo-substrate to cause PKA kinase inhibition. The inhibition is greatly enhanced by the presence of Mg2+ and ATP which the kinase binds, as it ‘locks in’ the inhibitor. PKIs have also been shown to cause translocation of the PKA catalytic subunit from the nucleus to the cytoplasm and themselves contain a nuclear export signal (3,4)

Three distinct PKI isoforms (PKIalpha, PKIbeta, PKIgamma) have been identified with each isoform present in the brain but showing variation in expression patterns (5,6). Each isoform possesses the capability to inhibit PKA at different strengths (7), but is not known what other functional differences might exist between these isoforms. Recently a requirement for PKIbeta and its inhibition of PKA (but not PKIalpha or PKIgamma isoforms) has been shown during neuronal differentiation of P19 cells suggesting other factors influence the system (8).

Finally, the 20 amino acid peptide region (PKI alpha 6-24) is effective at inhibiting PKA in vitro and, when linked to a cell-penetrating peptide vehicle, in vivo. Consistent with its PKA inhibitory action, this CPP-PKI blocked aggregation in wild-type Dictyostelium cells and, at appropriate concentrations, rescued the phenotype of a Dictyostelium mutant that has constitutively high PKA activity (9). We are offering this PKI alpha region linked to Cupid as Product: Cupid-PKI. 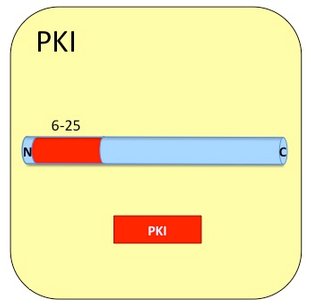