PTEN (Phosphatase and Tensin Homologue Deleted from Chromosome-10) has been identified as one of the most frequently mutated tumor suppressors in human cancer. It functions primarily as a cytoplasmic phosphatase to regulate crucial signal transduction pathways involving growth, adhesion, migration, invasion and apoptosis. It has been demonstrated to be involved in the regulation of a variety of phenotypes whereas its major function of tumour suppression is achieved by the downregulation of the oncogenic Akt/PKB (Protein Kinase-B) pathway. PTEN is expressed throughout the embryo, and has critically important functions in early embryonic development (1-5).

PTEN consists of a phosphatase domain that has a structure resembling protein tyrosine phosphatases but containing an enlarged active site that accounts for its ability to bind its PI (Phosphatidyl Inositol) substrates. There is a second major domain, termed C2, that binds phospholipids. This C2 domain appears to bind PTEN to the plasma membrane, and it might orient the catalytic domain appropriately for interactions with phosphatidylinositols and other potential substrates (8). Mutagenesis studies demonstrate the C-terminal tail of PTEN to be intriguing regulatory features that induce phosphorylation of certain serine and threonine residues (S380, T382 and T383) and can modulate both the enzymatic activity and the stability of PTEN. Loss of PTEN function, either in murine ES (Embryonic Stem) cells or in human cancer cell lines, results in accumulation of PI(3,4,5)P3 and PI(3,4)P2 and the subsequent activation of its downstream effectors, such as PDK-1 (Phosphoinositide-Dependent Kiinase-1), Akt, Btk family tyrosine kinases, PKC (Protein Kinase-C), and GEFs (Guanine Nucleotide Exchange Factors) for the Rho family of small GTPases (Guanosine Triphosphatases): Rac1 and CDC42. PTEN is capable of inducing apoptosis or a cell cycle arrest, and loss of PTEN in primary cells leads to either excessive proliferation or defects in apoptosis (9). 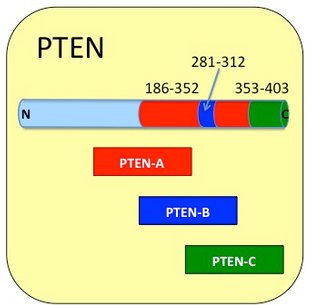 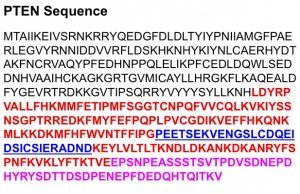 “D-Loop” within the C2 motif

PTEN contains a number of domains, including the N-terminal phosphoinositide binding motif and catalytic region, a C2 domain, two proline-, glutamic acid-, serine-, and threonine-rich segments and a PDZ-binding site at the C-terminal.

The crystal structure of PTEN (lacking the C-terminal tail) reveals intramolecular interaction between the N-terminal phosphatase and the C2 domain. The C2 domain of PTEN (residues 186-351) has been implicated in mediating membrane association of PTEN where it can act on inositol phospholipid substrates. The C2 region, however, appears to have a range of other functions such as a Pten - P53 interaction. Experiments using GST fusion proteins show that the C2 domain of PTEN interacts with the C-terminal regulatory domain of p53 (p53 residues 363–393) and enhances p53 transcriptional activity especially through its DNA binding activity (2). The C2 domain of PTEN also interacts with the Major Vault Protein (MVP) through and the first two EF hand domains of MVP (3). This region is contained in Product: Cupid-PTEN-A.

Within the C2 region there is another site termed the ‘d-Loop’ (residues 281 to 312) which has been recently shown to interact with actin binding protein Drebrin (Developmentally regulated Brain protein DBN) (4). The interaction causes dephosphorylation of DBN by PTEN and is inhibited by a cell permeating d-Loop peptide now available from this laboratory. This region is contained in Product: Cupid-PTEN-B.

The C-terminal ‘tail’ of PTEN interacts with several PDZ domain-containing proteins such as hDLG, hMAST205, MAGI-2, and MAGI-3. Peptides derived from the PTEN ‘tail’ or deletion of the carboxyl-terminal three amino acids of PTEN itself are capable of inhibiting the interaction with MAGI-3 (5). However the PDZ-binding site of PTEN seems not required for tumour suppression or other biological activities. The 71 amino acid C-Terminal region has also been found to interact within the C2 region and with the N-terminal phosphatase of PTEN itself, suggesting a complicated interplay exists between the different regions modulating auto-inhibition of phosphatase activity and of membrane translocation (6, 7). This region is Coming Soon.

The importance of C-Terminal interactions of PTEN in its biological function remains an area of great interest and the complete spectrum of PTEN-interacting proteins and the effects of the interactions on PTEN function are not yet defined.