NEMO, the NF-kB essential modulator (IKKγ), is a global transcriptional regulator found in most animal cells.

Nemo was originally described as being required for activation of the Nuclear Factor k-light chain enhancer of activated B cells (NF- kB) pathway in response to a wide variety of stimuli, including cytokines such as TNFalpha, pathogens, free radicals, hypoxia, UV irradiation and other such stresses (1, 2). The genes activated by the NF-kB pathway are involved in inflammation, immunity, cell survival, and cross-talk between pathways and non-canononical events of the pathway impact disease states like cancer and diabetes (3).

A key step in the NF-kB signaling pathway is the regulation of the interaction between NF-kB and the inhibitory IkB family of proteins, by the IkB kinase (IKK) complex.

The IKK complex is a large assembly of proteins (700–900-kDa molecular mass) consisting of a homo- or hetero-tetramer of two types of catalytic subunits, IKKα and IKKβ, which are associated with two molecules of NEMO (IKKγ).

The IKK phosphorylates the inhibitory IkB subunit of the NF-kB·IkB complex in the cytoplasm. This phosphorylation marks IkB for degradation by the proteasome and releases NF-kB from the inhibitory complex. The freed NF-kB proteins are then transported into the nucleus where they bind to their target sequences and activate gene transcription (4-6).

The essential function of NEMO is thought to act as a polyubiquitin binding factor which recruits the IKK complex to polyubiquitin scaffolds that have formed following receptor-initiated signaling. Wikipedia lists a dozen proteins that bind to Nemo (1)

The amino-terminal α-helical region is followed by a coiled-coil domain (CC1) from residues 44-196 that functions as the interaction interface with IKKα and IKKβ (the canonical IKKs) as well as TRAF proteins (TNF receptor associated factor) and as a dimerization region for Nemo itself (2, 3). The region is attached to two products: Cupid-Nemo-A (residues 44-111) and Cupid-Nemo-B (residues 100-196)

At the extreme carboxyl terminus, there is a zinc-finger (ZNF) region that is very likely involved in mediating interactions with ubiquitinated proteins (4). It may be involved in interactions with substrates such IκBα (Inhibitor of κBα ) which are thought to mask the nuclear localization signals (NLS) of NF-κB proteins. The C-terminal part of NEMO is also involved in the oligomerisation of the protein.

Using human protein microarrays, 112 NEMO binding proteins have been identified, including a large number of signaling kinases and proteins related to development and the cell cycle and cell resistance to apoptosis (5-8). 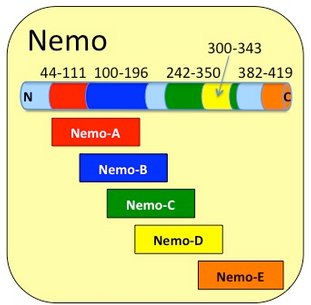 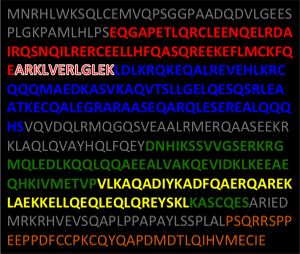